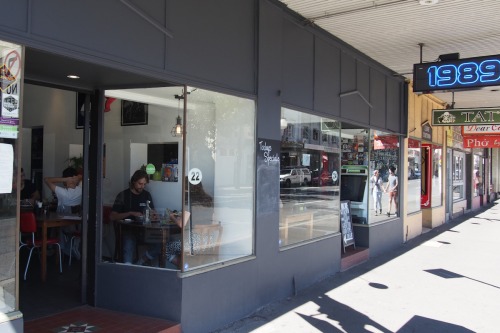 If Sub-Zero, Sonic, Mario and Michelangelo were some of your favourite play-time partners, then you’ll immediately know what I’m talking about and already be rummaging in your pockets for coins.  Welcome to 1989, where your retro nostalgia can come to the fore as you eat cheese burgers surrounded by the sights and sounds of yesteryear.

1989 is owned by Ben and Marnie Campbell.  Ben’s previous roles include editor of the TV series Peppa Pig and director of food and travel shows for Good Food, Food Network and SBS ONE.  Marnie is a teacher of dance and performance and currently works for NIDA.  Ben’s passion for retro and arcade games inspired this café and it’s quite unique on the Sydney food and bar scene.

1989 is named after the year in which Teenage Mutant Ninja Turtles, the first machine that Ben bought for his personal collection and that now resides in the café, was made (and I can say that I sank more than a few coins into this cabinet).  When you visit, what you’re essentially walking into is the embodiment of a lifelong obsession and love for movies and video games. 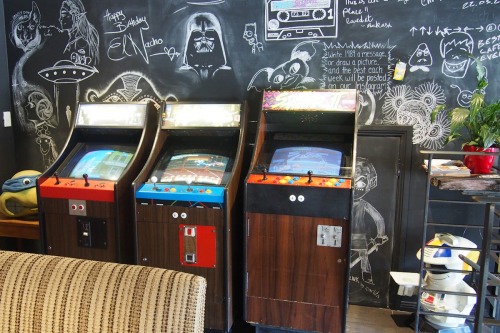 The memorabilia is everywhere.  From the Sega Master System playing Sonic the Hedgehog by the barista to the wall of comic covers behind the counter.  The main dining room contains a feature wall of 500 VHS covers of some blockbuster, classic, trashy or in some way unforgettable movies.  The high scores wall of fame sits above diners as a reminder of the tasks ahead!

There was hardly anyone in the café when we arrived at about 9:30am on a Saturday but things started to pick up by late morning.  There’s no outdoor seating but there are two dining room with lots of room to move.  The service was fine enough, perhaps it was too early on a weekend morning for them to be too lively!

I’ve never felt so adult yet childish at the same time.  I wanted a coffee but I also wanted to throw some hadoukens down!  The coffee ($3.50) is supplied by Little Marionette so it’s little surprise that it was delicious.

The milkshakes ($6.50) are prepared with Serendipity ice cream and they pack a punch.  Our Death By Chocolate shake was spot on in terms of consistency and flavour.  It’s always encouraging to me to find an establishment that executes their beverages so well… it often bodes well for the food.  Many other flavours are available including banana, strawberry jam and coffee. 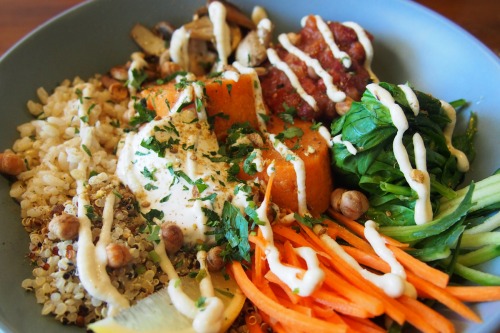 I admit that while I was exceedingly excited about the prospect of playing some of my favourite games, I was no expecting much from the food when we were on our way to 1989.  Even after tasting the coffee and milkshake, I had my doubts.  Because this isn’t common.  When was the last time that you enjoyed a solid meal in a video game parlour?

Well, head to 1989 and you’ll do just that!  My guest ordered the vegetarian Buddha bowl ($15).  It has a lot going on but essentially the plate is broken up into brown rice, fresh cucumber and carrot, silverbeet, sauteed mushroom, baked sweet potato, spiced chick peas and house made kidney beans.  This is all topped with a tahini yoghurt and sprinkled with dukkah.  While simple in its execution, that’s all that is needed.  Nothing was overcooked and the vegetables were respected enough to provide a lot of the taste.  There was flavour where it counted including the beans (and it can be hard to find good house-made beans).

I relished my Benedict eggs ($15).  The eggs were poached perfectly and the bacon which was plentiful was also cooked just the right amount with enough crispy bits while still retaining some texture.  This Benedict uses a potato rosti as its base and gee was it delicious!  With a very soft interior it was also seasoned very well.  The hollandaise is a housemade one with a touch of cider.  The consistency was just right and while it was sweeter than what I was expecting, this is certainly how I would expect a ‘Benedict with a difference’ to be made.  Out of the box but done well!

You’ll notice that the menu has quite a big variety of items.  Ben explained that with the many types of people found in Newtown, all of these appetites need to be catered for.  This is why you’ll find a cheeseburger rubbing shoulders on the menu with a sweet potato burger.  Roasted vegetable focaccia or steak sandwich. 1989 prides itself in offering a lot of vegetarian and vegan dishes.  While there is variety it’s also controlled but one thing is for sure: there are lots of dishes I want to return for.

Expect a few additions and changes as things progress at 1989.  Video game events, pasta, wine and other bar-type offerings.  I’m looking forward to the progression but for now I highly suggest that you drop in to experience what 1989 has to offer.