It is only thanks to the courteous management of The Carrington that this review is being published.  Despite difficulties with camera lighting that were nobody’s fault but my own, they have been very accommodating with my requests to return for another sampling of their menu.
Within that short space of time they also updated their menu, taking the Central/South American theme and adding dishes that originate from the Deep South of the US.

Don’t make the mistake that I did the first time and walk into the bar section of The Carrington off Bourke Street.  The Arthur Street entrance will take you to the well-lit, more vibrant section of the establishment.  Staff were on the ball and seated us immediately.  The interior reminds me of a Mexican cantina mixed up with various influences from God-knows-where.  You get the idea that it would work very well at night (and it does) once the alchohol begins to flow! 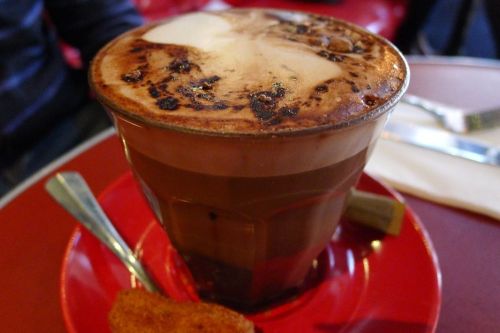 Kick-ass mochas ($4) and flavoursome cups of coffee ($3.50) with tasty samplings of churros on the side await!  While one of my guests prefers her coffee very strong, she was happy with the Vittoria flavour.
For the healthier amongst you, fresh juice (orange, apple or grapefruit, $6) is available.
And for those after something harder, not only is there a small selection of morning cocktails such as Bloody Mary (vodka, tomato juice, pepper, Tabasco, Worcestershire, $15) and Bloody Caesar (vodka, house Caesar mix, hot sauce, lemon juice, clamato juice, $15), but you can have your coffee filthy (with rum, $10) too!

This isn’t your usual hash but for those after a hearty, salty dish that is perfect for winter, look no further than the salt cod and morcilla hash ($16).  The morcilla (blood sausage) was relished by a British friend who gave it her tick of approval. The hash is topped with a duck egg and watercress.  The guest who ordered this said that he enjoyed it but could not discern any standout flavours.

The empanada rancheros ($15) had some flavours that complement each other very well.  The empanada itself was starting to lose its crispness when it hit the table because of the creamed corn below and fried egg above but it was delicious regardless.  The pastry was light but had plenty of layers.  Within was a bursting interior of ham hock and beans which I think worked a bit better with more heat so I added Tabasco. 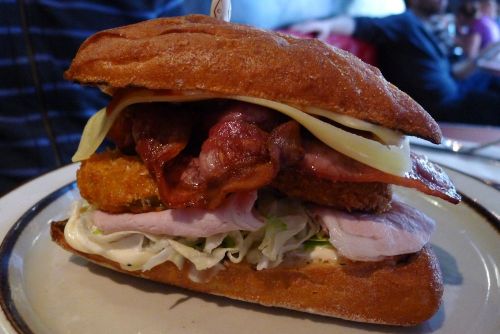 We have here the king of sandwiches!  The B.L.F.T is somehow available for the paltry price of $12 and comes absolutely laden with plenty of crispy double bacon and smoked pork.  Yes there is also Swiss cheese, fried green tomatoes and mayonnaise but it’s hats off to the Pig Gods who bestowed their heavenly layers of hoggy goodness in between this towering damper bun.  I recommend rolling up your sleeves and using both hands!

Bring out your inner vegetarian to enjoy the smashed avocado & chickpeas ($14).  This is a monstrous serving which my guest criticised as being too large.  I disagreed, claiming that no such meal exists!  Either way we concluded that the addition of the jalapeno was genius.  There was also a hint of smokey eggplant and plenty of goats cheese.

I have tried fried chicken & waffles ($16) before but not as good as this.  The waffles themselves were fluffy and crispy on the outside but it’s the chicken that makes this dish shine.  The crispy batter was outstanding thanks to a delicious mix of spices and a chilli maple syrup to pour over.  The chicken pieces inside were plump, tender and cooked perfectly.  Often, chicken dishes can fall down because they are too dry but this one was spot-on.  Nothing to fault really…
What other breakfast treats await at The Carrington?  How about griddle cakes with coffee soaked prunes and maple ice cream ($16), Spanich baked eggs with chorizo, peppers, tomato and dukkah ($18) or smoked paprika eggs Benedict with iberico ham, sobrassada, spinach and English muffin ($18).
Weekly readers will know that I appreciate establishments that try something unique and pull it off.  I thoroughly enjoyed the Spanish influences throughout the new menu at The Carrington but it was the two ‘truly American’ dishes that stood out for me.  I’d happily return and that says a lot considering the bounty of fantastic cafés in the area.