Visiting Melbourne posed a whole world of problems when it came to what café to review.  If you’re reading a food blog you most likely have an idea of the food culture that exists there.  Creperie Le Triskel was a random choice which luckily paid off!  Le Triskel is a French celtic symbol symbolising the cycle of life, the three branches referring to spirit, mind & body, air, fire & earth, etc.  The Bretagne region that the symbol originates from is also the birthplate of galettes (crêpes).

Creperie Le Triskel then, as its name suggests, specialises in crêpes and French fare.  The owner and employees are unmistakebly French and a blackboard invites you to order in French with an example of how to do so.  There is no pressure though and our waiter was helpful and willing to give advice both on our choice and method of ordering.  We arrived at about 3:30pm and by simple luck there was a table inside (not only was it cold outside but the café was also very busy).

One of our guests took the advice on hand that crêpes are traditionally eaten with apple cider and ordered a glass (or cup as it turned out to be) ($6.50).  She thoroughly enjoyed it – very flavoursome and fresh others, regretted not ordering the same!

When in France… uhh Melbourne… do as the French do.  Sip a cafe latte ($2.50) and enjoy the cosiness of a warm café as winter passes you by.  The coffees were simple and fantastic.  We’re unsure of the blend used but at $2.50 each we could have stayed drinking all day.

Other drinks on offer include a large selection of T2 and herbal teas ($3.50) including organic options, French sirops (cordials) in flavours such as lemon, mint, mixed berrys and almond ($2.50) and organix Phoenix juices ($3.50) 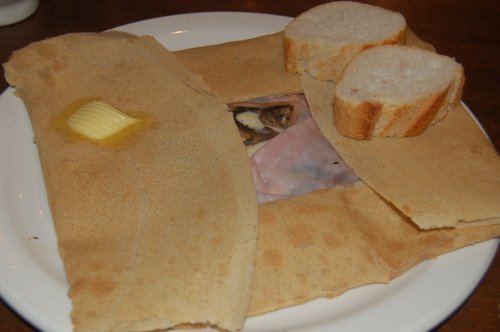 The kitchen in Creperie Le Triskel is very compact.  The chef is only able to make three crêpes at a time but she was efficient and we estimated about four minutes for each group of three dishes.  The La Broceliandre ($11) contains French bechamel, Swiss Gruyere cheese, mushrooms and a choice of ham, prosciutto or turkey (add $1.50).  The pancake itself melts away as soon as you take a bite allowing all of the other ingredients to literally flow over your tastebuds.  The Gruyere was rich but we didn’t (and you won’t) care.  Despite the bechamel combining to strengthen the creamy flavours, the ham and mushrooms helped to play down the richness and create an amazing combination of flavours.  We can attest to the fact that the owners pride themselves in using fresh and flavoursome ingredients – only the best it seems. 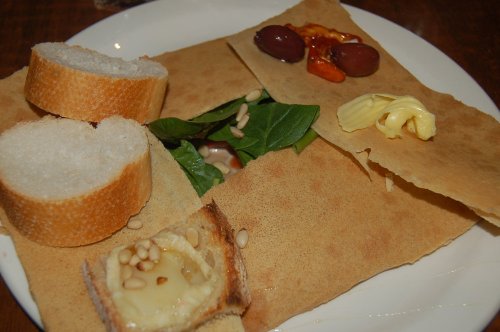 Consider the La Biquette ($13) to be one of the three big daddies of the menu.  I felt priveledged that my crêpe featured more garnishings than the rest at the table!  The lush toppings you see above are just a taste of what’s to come.  Smother the melting butter on the soft bread and relish the grilled goats cheese, honey and pine nuts before diving into the melting depths below.  What lies there is a very generous layer of goats cheese which is slightly red because of the tomatoes that have been mixed through and fresh spinach slowly softening from the melted cheese.  I can highly recommend this crêpe to anyone who wants to indulge.

Despite the menu saying that all crêpes are served with a complimentary green salad (at lunchtime) and French bread, we did not receive the salad.  Perhaps three o’clock is the cut-off time?  One promotion that had us intrigued and that suggest you try if you have a chance is the Friday evening cheese degustation (affectionately called “Stinky Fridays”.  Cheese platters are $12.50 per head and include Gruyere, Basquitou, Fleur du Maquis, Caprifeuille, and Fourme to name a few.  The sweet crêpes that we saw coming out of the kitchen as we left looked amazing too: fresh strawberries and warm melted chocolate ($7.50) and other ingredients including sugar, cinnamon, jams, fresh-made caramel sauce, bananas, lemon juice…!  I’ll leave you drooling with those thoughts.

This entry was posted in Victoria and tagged Organic Options. Bookmark the permalink.