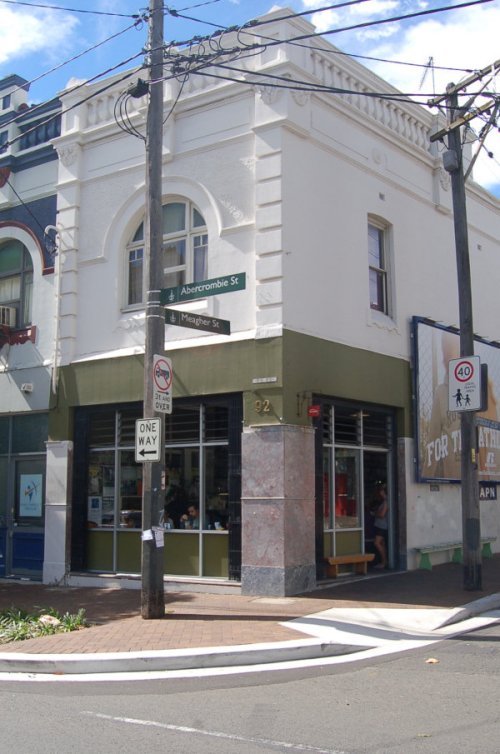 Cafe Giulia is one of those establishments that has built up a cult following.  It’s cosy enough to call it your second home – we’ve been there numerous times already for breakfast.  No matter whether you prefer a counter, table, indoor seating, outdoor courtyard or kerb-side bench, they have a spot for you.  Mornings get busy and the menu (both beverage and food) is huge.  Luckily there’s plenty of time to give it the once over as you stand in the line waiting to order.  Once ordered it’s all table service – fast and friendly.

The coffee doesn’t disappoint.  The skim cappuccino ($3) arrived quickly and was drunk just as fast.  The chocolate was maybe a bit too liberal and not enough care was taken on the presentation – a trend we found continues through most of the dishes. 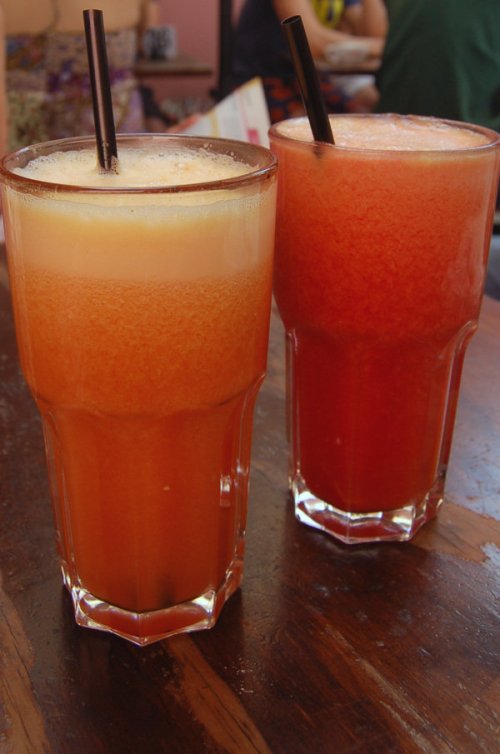 Pick your fruit and most likely Giulia will squeeze it for you.  We decided on two combinations to try: orange and papaya, orange & raspberry ($5.90 each).  Other options include pear, beetroot, apple & ginger, watermelon, rapsberry & mint and orange & pink grapefruit. You get a decent-sized glass for your money.  The orange tasted fantastic although the papaya  mix tasted of mainly orange with not much else.  Occasionally you noticed a hint of raspberry but that was it.  We would also have preferred the juice to have been colder – no ice and what appeared to be very little refridgeration. 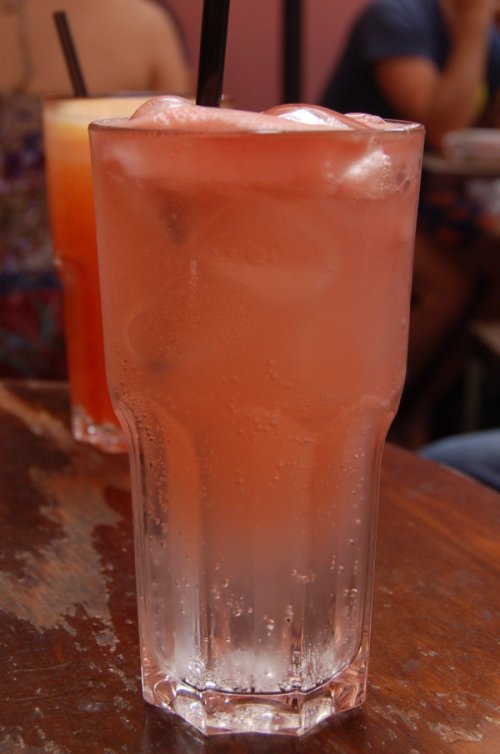 Fresh fruit sodas.  Be sure to order one of these novel drinks when you visit.  You have the choice of passionfruit, grapefruit, raspberry, lemon or lemon, lime and bitters ($3.90 each).  Frothy, cold, fresh and thirst quenching – what other adjectives does a drink need?  We tried the pink grapefruit soda  ($3.90) which was sweet and refreshing.  It was also very pretty to look at.

The French toast ($14.90) is served with grilled banana, maple syrup and a bowl of marscapone.  A side of bacon is a further $4 which makes it one of the more expensive dishes we’ve experienced but the serving was generous enough.  The bacon is served with the rind on, something that will urk some but Dane relished the crunch.  The marscapone wasn’t really needed, the toast, banana and bacon are already a fantastic combination. 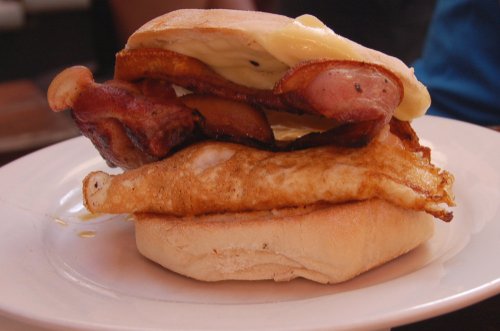 The Bacon and egg roll ($7.90) was a good size for a Sunday morning appetite.  The bacon was overdone in parts which made it hard and crunchy.  The egg on the otherhand was perfectly cooked and oozed out over the bun, delicious!

A plainer version of the previous dish, the Egg and cheese roll with barbeque sauce ($6.90) was a good option for April who had to play soccer a few hours later.  Once again the egg was cooked perfectly resulting in a big smile on her face.  We should include a rating scale for the look of contentment on our faces after each dish! 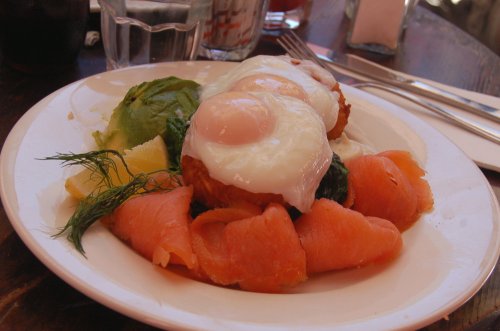 The smoked salmon breakfast ($16.70) was an impressive dish.  It consists of two large hash browns topped with poached eggs, fresh smoked salmon, and cooked spinach.  Avocado was added for $4.  The hash browns were fluffy and come highly recommended.  The combination of the egg, hashbrown, salmon and the seeded mustard mayonnaise on a fork blew us away.  Again we were disapponted with aspects of the presentation.  The dill was wilted and there were small crumbs and drips around the plate, something that a cloth in the kitchen would easily fix (and brought our rating up into the twenties).

Scrambled eggs with side order of sausages

The eggs dishes offered consist of scrambled, poached, over-easy or sunny side up eggs served with toast, grilled tomatoes and mushrooms ($9.90).  We added sausages for $4.  Once again it didn’t look very appetising however it delivered on taste.

A trip to the female bathroom is a must at this cafe (and it’s hard to tell which is which so you’ll get away with using either) because there are wonderful murals to admire.  Take a look and see for yourself.

After an hour or two of chatting over good food with friends, we recommend a stroll around the neighbourhood.  There were small communal gardens on the footpaths consisting of a range of herbs.  There are also plenty of quirky houses and hidden parks to discover.

This entry was posted in Sydney - CBD and tagged Outdoor seating. Bookmark the permalink.